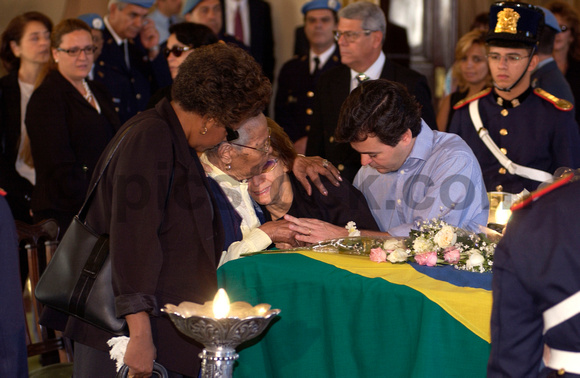 Gilda Vieira de Mello gets some comfort from Maria Francisca Domingos, the ex-nanny of her son, and Andre Simões , her newphew, while she cries in front of the coffin of her son, United Nations Coordinator for Iraq Sergio Vieira de Mello, inside the City Palace in Rio de Janeiro.
Vieira de Mello died on Aug 19 in a suicide bomb attack against the U.N compound in Baghdad. In the deadliest attack ever against the U.N. organization, a suicide bomber drove a flatbed truck loaded with 1,500 pounds of explosive up to the wall of the compound, just under Vieira de Mello’s office, and set it off. More than 20 people were killed and dozens were wounded in the attack.
Frederic Neema/ picstock.com
Powered by ZENFOLIO User Agreement
Cancel
Continue