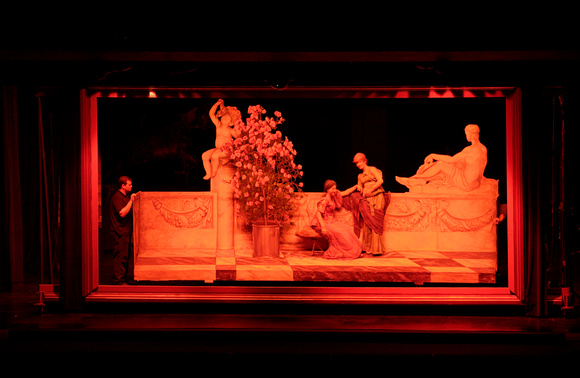 A technician rolls the set of a living picture or tableau vivant just before the lights are turned on in Laguna Beach, CA, on July 23, 2002. The live actors can be seen taking their position in this re-creation of the painting "Unconscious Rivals" by Sir Lawrence Alma-Tadema (1893).
They are part of the 2002 Pageant of the Masters "Heroes and Heroines" in Laguna Beach, California. The Pageant of the Masters features tableaus vivants which are a theatrical re-creation of the world's great art masterpieces on various stages using live actors painted into the backgrounds.
Frederic Neema
Powered by ZENFOLIO User Agreement
Cancel
Continue